Today, in the name of science of course, I have been digging in to some of Japan’s wonderful and strange snacks courtesy of my fab friend from Japan! 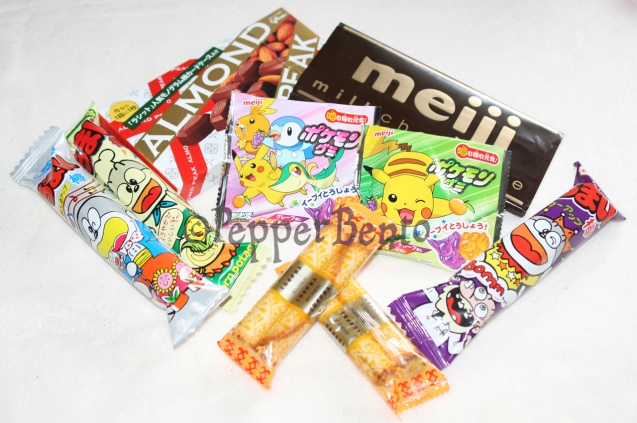 As you can see there are chocolates, sweets and crisps, all the food groups I need!!

Anyone who knows me, knows that I am an avid Pokémon fan, the original 151 are my favs!
So what an amazing surprise it was to find Pokémon gummys! 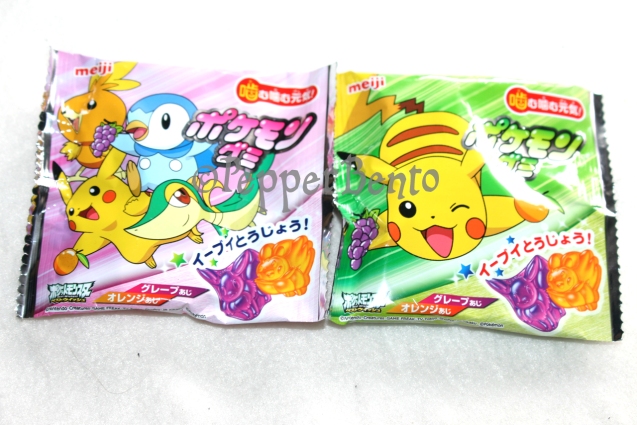 From the package it looked as if there were two big gummies in the pack, as shown in the right hand corners buttttttt……… 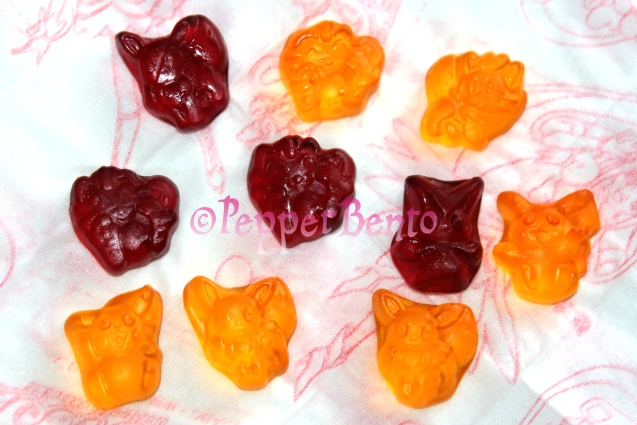 …there were lots of gummies!

Intensely orange and blackcurrant flavoured and as cute as buttons!

There was Eevee, Meowth, Pikachu and more until they all found there way into my mouth………tehe.

Then there was meiji milk chocolate! 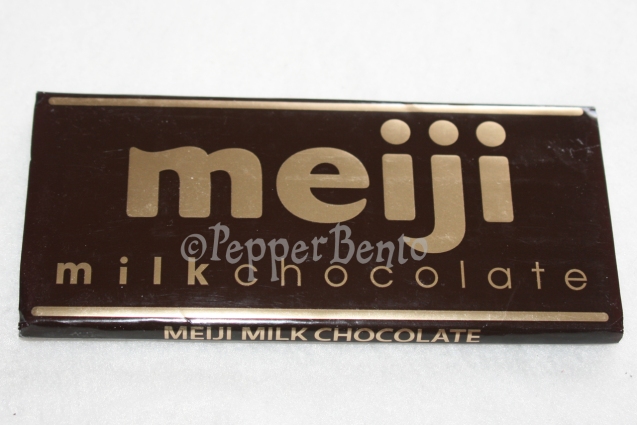 This was a block of chocolate, with good sized blocks for snapping off and snaffling!

As far as I’ve heard from my Japan insider, Japan don’t have the best chocolate selection in the world (I’d like to think that’s here in England!) but this chocolate was rather pleasurable.

It tasted almost like a standard chocolate, the kind made by Nestle here, it was thin though so the texture was different and very nice.

It was quite harsh, almost like a dark chocolate but did have a creamy back note to smooth it out!
Yum!

Next were these little crisps! 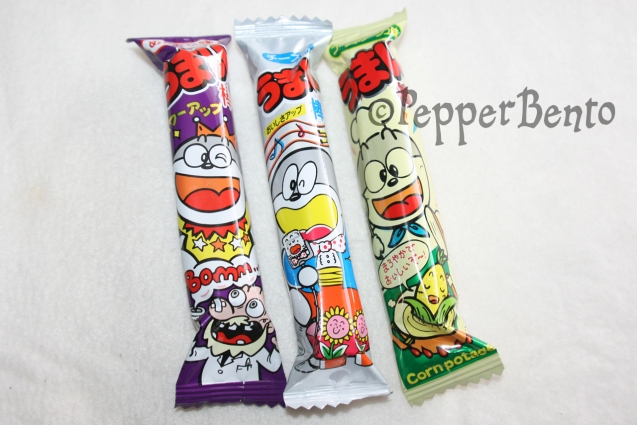 Most of us wouldn’t have recognised these as the crisp component to this treat trove as they aren’t the usual air and crisp filled bags!

These are individual puffy maize crisp sticks!
No wonder Japan is one of the healthiest countries in the world!

These are called Umaibō or delicious stick!

I have been lucky enough to have had them before but not in these flavours!

These were from left to right, Mentai, Cheese and Corn Potage flavours!

Purple packaged Mentai flavour was probably the most originally Japanese of the three, which is why I’m rather embarrassed to say it really wasn’t my cup of tea.

Mentai is the marinated roe (fish eggs) of Pollock and Cod fish which personally I wouldn’t eat from a moral stand point but that really isn’t the reason I didn’t like this one.

It just had an overwhelming ash sort of taste.
Call me crazy but that’s what I tasted!
Slowly it turned into a fishy, spicy curry flavour, spicy mentai anyone?!

The next flavour, featuring some karaoke going on is cheese flavour!

This flavour is not unlike a giant Wotsit if you have ever tasted one, thought it has a sharper more cheesy taste to it, really delicious!

Last but not least was the corn potage flavour!
How cute is that corn in the cooking pot?!
Looks pretty happy from here!

This flavour was very strange, it was rich, buttery and creamy but then that gave way to this really amazing fresh corn taste, it was delicious but unusual to be eating actual corn flavour in a crisp! 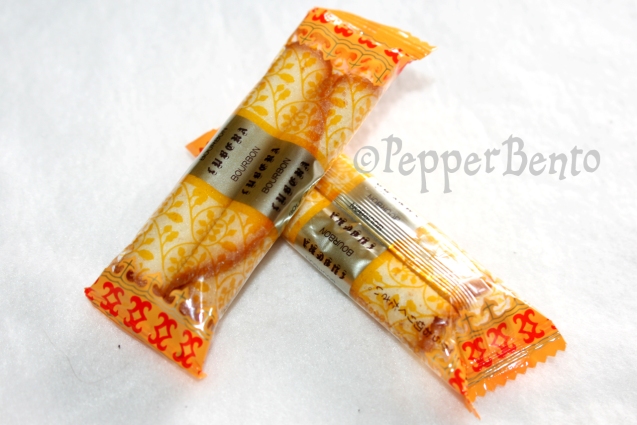 These say Bourbon on the package but I’m not sure if that pertains to the flavour or something else as I didn’t detect any bourbon flavours coming through.

What I did detect though was amazing!

They are crispy, though lovely and soft when bitten, softer than shortbread, as buttery as a croissant and have the wonderfully sugary edge of a Nice biscuit!

Last, but certainly not least, the star of my stomach, Almond Peak! 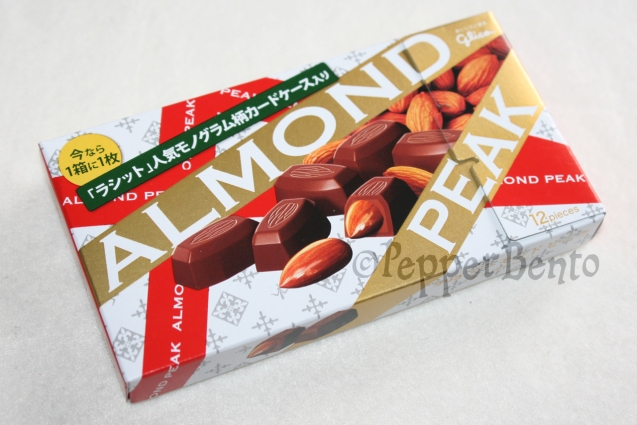 These are not only pretty but are absolutely delicious too! 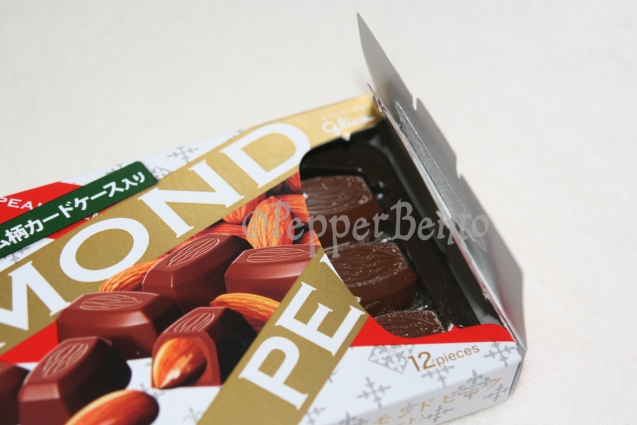 There are some almonds peeking! Hehe.

The aroma of these are as good as the taste, these almonds taste like they have been slowly roasting for a long time, which leaves them so full of flavour but also softer than a usual almond, crumbling and yielding. 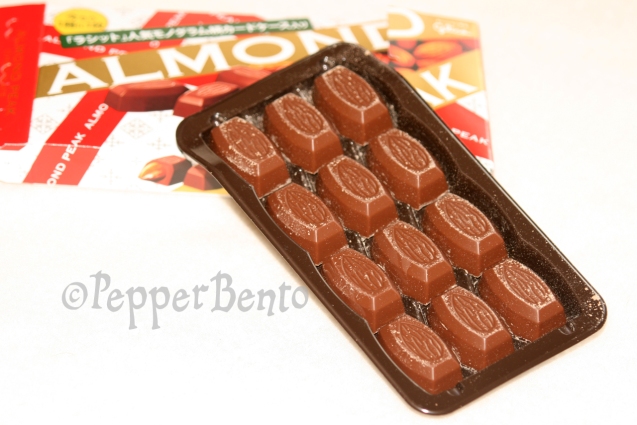 The best way to try almonds,ever.

Have a look at my other gifts from Japan posts!