My husband loves the puffy and light pastry that is choux.

His particular weakness in this department is the Chocolate Éclair, a long tube of the stuff split open, smothered with cream and topped with melted chocolate.

I have to say though, that I have never been a fan.

Yep, lock me in the looney bin, I’m obviously crazy.

With the ratio of cream and chocolate in this one sweet treat it’s an impossible feat to not like them really.

The reason I never liked them though, in a word, is supermarkets.

Pre-made chocolate éclairs from supermarkets are edible….but not great.

The choux pastry is always very soggy, usually with water droplets all over it and will droop straight away if it isn’t held up.

The cream is okay, it is cream after all, but the chocolate seems to be made out of some kind of plastic sheet which you can almost peel off of the éclair.

You can imagine how good that part tastes.

All in all I wasn’t keen though one thing was for sure, I knew there was something good behind this sad and soggy example.

Choux pastry is one of those things that is thought of as elegant and a little extravagant but I think of it more for its amazing lack of ingredients making it easy for everyone to have and relatively cheap.

It does take a lot of love though.
If a couple of hours in the kitchen doesn’t sound like fun, chocolate éclairs aren’t the project for you.

It is worth it though, my éclairs are much cheaper than buying them and have a crisp outer shell with so much flavour compared to the tasteless sogginess of supermarket ones.

They also have lashings of extra thick cream, though do use double if you like things a little lighter.
You won’t miss the cream when you bite into one of these either way!

There is also real melted chocolate on rather than that plastic like plaster, sooo good!

To put it simply, they are far and away the best chocolate éclairs I have ever tasted.

Of course, these aren’t as pretty and formulaic as shop brought ones, I kept them rustic to keep them from being too troublesome to decorate.
You can use a piping bag to put in the cream but I just used a spoon.

You could also go so far as to put the cream in without making a slit by piping it into a small gap in the front or back but my life is too short for that! 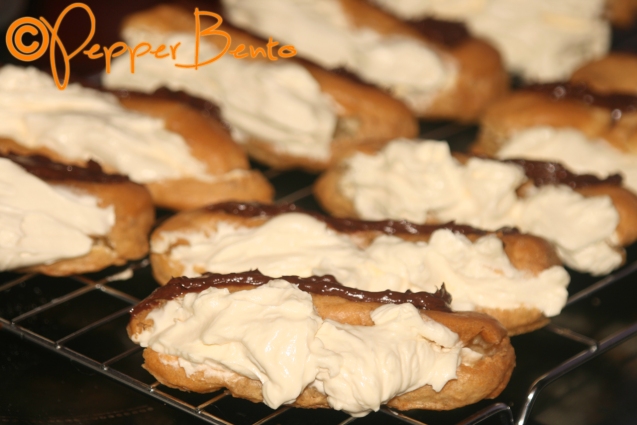 The choux pastry can be a challenge, especially without a detailed recipe to tell you exactly what should be happening but luckily I always make my recipes as detailed as possible so it shouldn’t be difficult at all.

Just remember that you want the pastry to be almost like a bread dough before the eggs are added and don’t heat it too much once the flour is added!

Lastly, you will need a piping bag for this.
Personally I didn’t have one so I used a freezer bag and cut off one corner to the size I wanted though for ease, a piping bag would be best.

Sift the plain flour on to a piece greaseproof paper.

In a small saucepan put in the water, salt and butter.

Heat it gently until the butter is melted then turn up to full heat until it comes to the boil.

Tip in all the flour at once.

Remove from the heat and beat as hard as you can until it comes together to make a smooth heavy dough.

Place the pan back on a low heat and keep beating until it comes away from the sides of the pan and forms a smooth glossy ball.

Place the dough in a large mixing bowl and leave to cool until lukewarm.

Break the eggs into a jug and beat them.

Beat the egg into the dough, a small amount at a time until it becomes very shiny and paste like, falling off the spoon when lightly shaken, you might not use all the egg.

Grease a baking tray with butter and spray/sprinkle a small amount of water on to it, shaking off the excess.

Spoon the pastry into a piping bag (or strong freezer bag) with a 1/2 inch plain nozzle.

Pipe 4″ Lengths on to the tray and bake for 15 minutes.

Without opening the door, reduce the heat to 170◦c and bake for another 10 minutes or until golden.

Remove them from the oven and carefully make a small hole in each with a skewer or end of a knife to release the steam and place back in the oven for 3 to 5 minutes until completely crisp.

Transfer them to a cooling rack.

For the filling
Whip the cream, sifting in the icing sugar and adding in the vanilla extract (if using) until stiff.

For the icing
Melt the chocolate, in pieces then cool slightly.
Stir in the cream until fully combined.

Once the éclairs have cooled completely, cut down the length of one side and pipe or spoon in the cream.

Hold each éclair over the bowl of melted chocolate and with a palate knife or small spatula, spread the chocolate on to one side of each.

Place the éclairs on the cooling rack again and wait for the chocolate to set before serving.

Eat right away or store in the fridge and serve chilled.