Good afternoon all, hope you’ve had a good lunch!

Has anyone else noticed that just as soon as Christmas ended and all that merchandise was put away, they all whipped out the valentines day parade?

Much like Christmas, I don’t celebrate Valentines day.
By my calculations, if I love someone and want to show them, I can do that any time, I don’t need a specific slot set out by Hallmark cards company to tell me to.

Anyway, I must have been influenced somehow by all the red love hearts floating around because an idea for a bento box popped into my head while I was idly brushing my teeth. 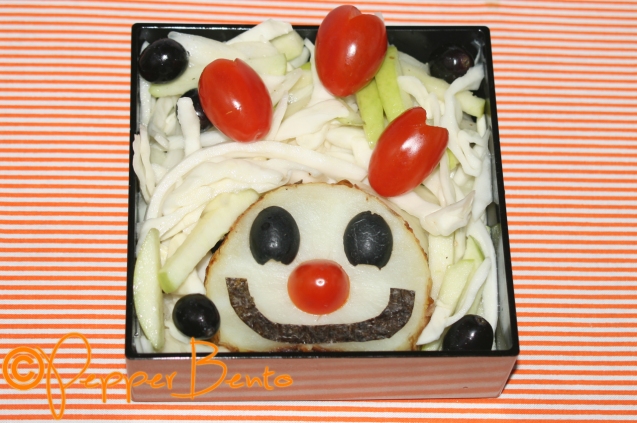 This poor unfortunate chappy is in love.
Sure it’s doomed to failure as his life was soon to be cut short be being devoured but hey, he had a dream.

We can tell he was in love because of his overly dopey smile.
A smile of course, which only truly happy people make.
Of course the love hearts popping out from above his head is another give away, I’m sure you have witnessed such an occurrence yourself in real life.
It’s so annoying when someone else’s ignorant old love hearts end up poking you in the eye while you’re on the bus or a park bench.
Even worse, if your own love hearts poke you in the eye, so embarrassing. 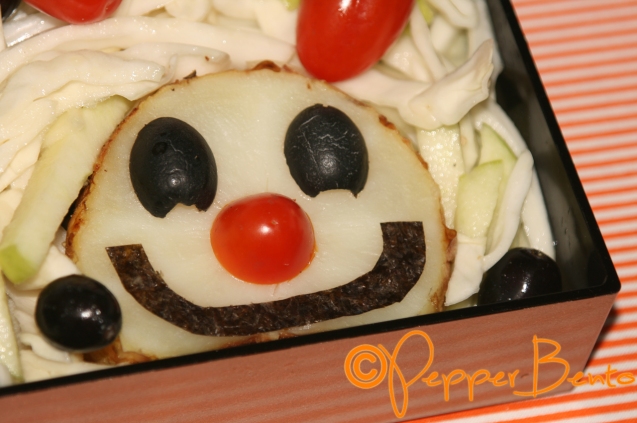 I made our dopey little chappy by cutting the middle from a large potato I freshly baked, cutting out a nori seaweed strip for his mouth, using the bottom of a cherry tomato for his nose and olives for the eyes.

I will tell you now that even though I have used olives here as decoration, I do not condone ever eating them at any time for any reason, not even to save 100 orphans. They are horrible. Just horrible. 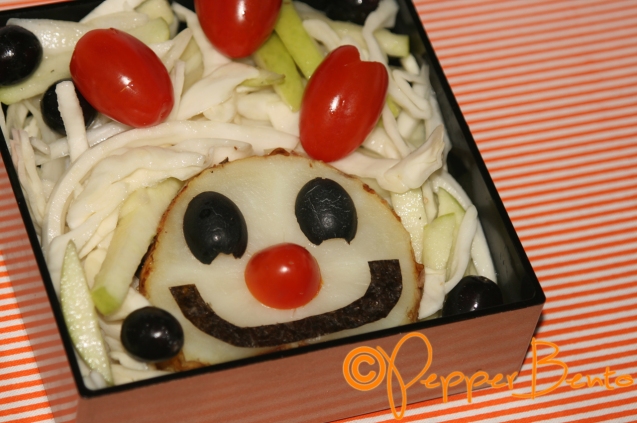 For his bright background I made a salad of white cabbage, onion, apple and small grapes, NOT OLIVES!!!!!!!, and made a vinaigrette with cider vinegar, salt, pepper and mustard sweetened with a little golden syrup to make it sweet, but also savoury at the same time. 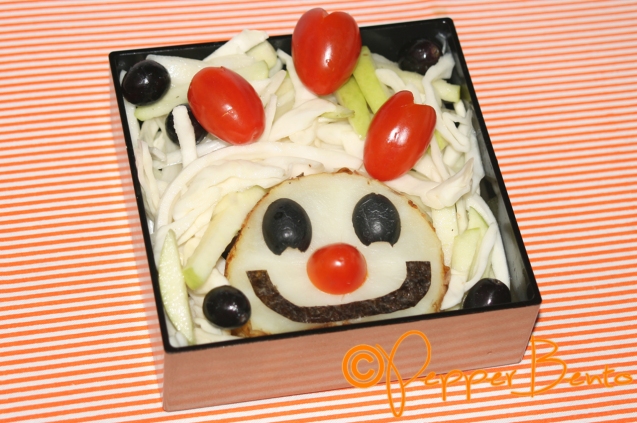 For the finishing touch I cut some tomatoes into heart shapes, placing them all above his noggin for good measure.

What or who was this little guy in love with?
Who knows.
Maybe it was the white cabbage salad that was reassuringly caressing him from all sides.
Maybe he was just conceptualising what love was for the first time.
We will never know, we never had the time to ask him.
He was too tasty, apart from the olives, for conversation with I’m afraid.