Lately I have been seeing these strange ready meals, not in the fridge or freezer aisles though, on the regular shelves.

I was very curious to know just how, what appeared to be an entire meal, complete with fish, could sit on a shelf without refrigeration for a couple of years.

I gathered up two of these meals and braced myself for the possible horrors that awaited.

I picked one up by Princes tuna and another from John West Tuna both of which are the top known brands for tuna here in England.

I would say they’re in fierce competition with each other but these days I wouldn’t be surprised if they were both the same company!

These are both ready to eat though the Princes meal can be microwaved.
To make it all completely fair they will both be judged cold and straight out of the packaging.

The Princes meal is a “Tomato and Chilli Tuna Pasta Bake”. 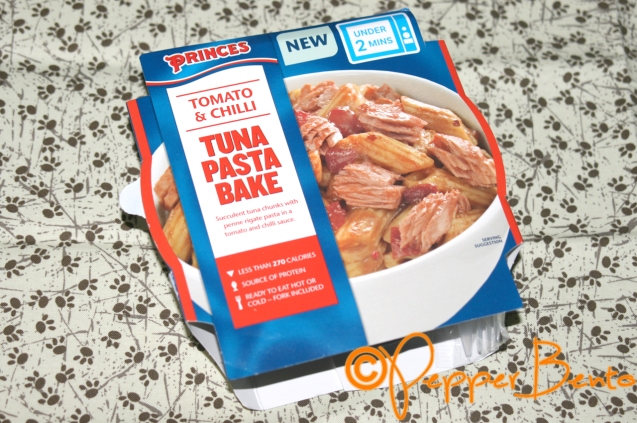 It looks quite nice on the package but we all know that those pictures are dirty dirty lies.

These seem to be sold as a sort of “health” meal since they advertise how little calories they contain, I guess tuna being known as a really healthy food also helps the feeling of it being good for you.

The tuna looks nice in the picture and we can only hope that it is actually Princes tuna they use inside.
It comes with a fork so you can eat it on the go, in the event that it isn’t evil poisonous doom. 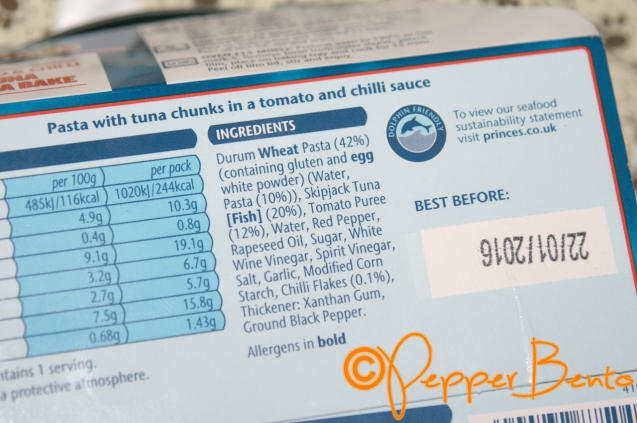 As for the ingredients it all looks extremely innocent.
The only things that wouldn’t be added to any home cooked meal is the Xanthan Gum.
The salt even looks quite low compared to a lot of convenience foods.

Still, somehow it does last until 2016!
I think we can safely guess that it is how they’re packaged rather than what us put in the actual food that makes it last, though this meal doesn’t appear to be canned and is in a plastic bowl.

As for John West, this does look like a giant can really, so it’s no wonder it can last up until 2017.
In fact it actually looks like a Sheba can, a brand of cat food. 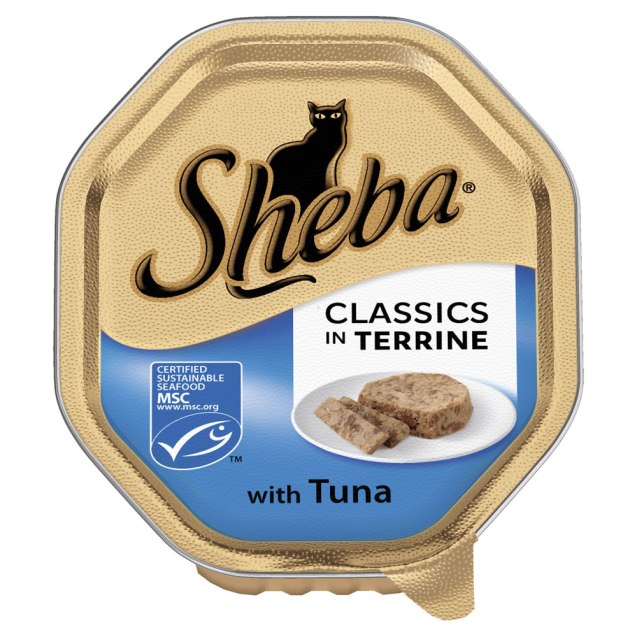 Lets just hope it’s not the same as what they get….then again…I can’t see anything that says this is for humans……. 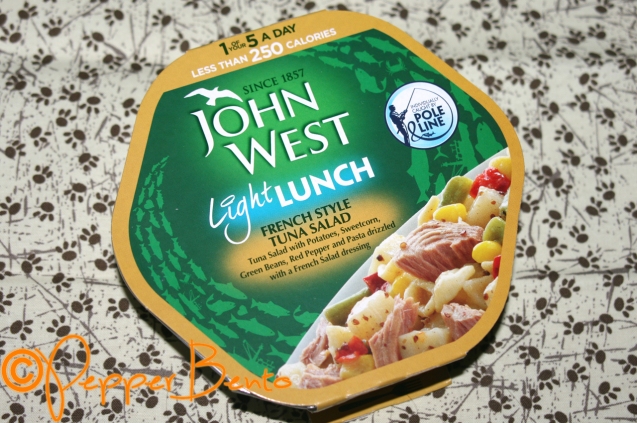 Again it’s advertised for it’s small amount of calories and is, according to the title anyway, a French style tuna salad.

Again it looks quite nice on the package and has potatoes, sweetcorn, green beans, red pepper and pasta with French salad dressing inside which doesn’t sound bad at all. 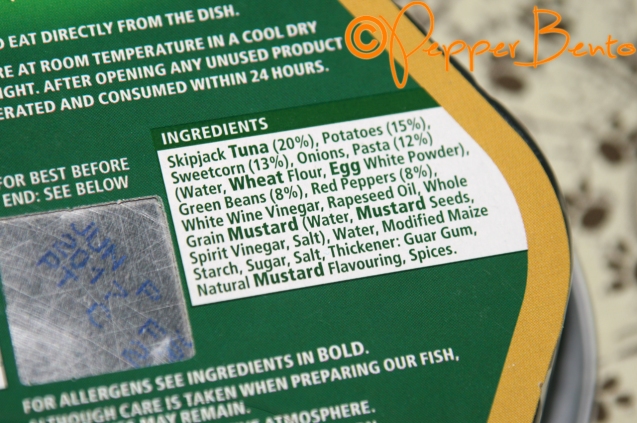 The ingredients are again, not sinful at all which is a great change, for these kinds of meals.
That alone doesn’t guarantee it’s edibility though, so lets see how the pictures measure up to the real products!

Lets go back to the Princes for a moment! 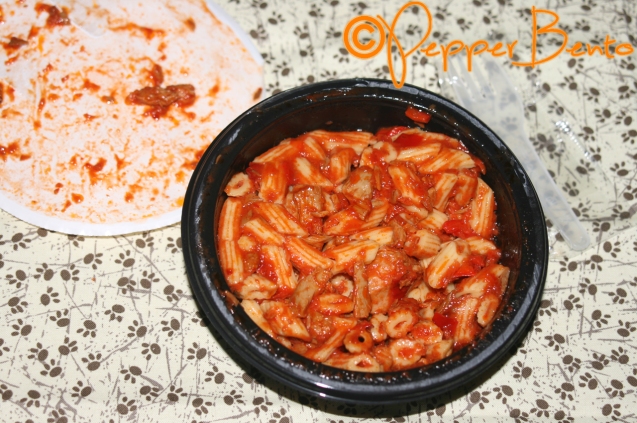 Well, it looks okay.
Sure it’s not the massive chunks of pink looking tuna carefully placed on top of tomato pasta like the image but it does have very reasonably sized tuna pieces in it and plenty of sauce to go around.

Lets be brave and tuck in.

If you like red pepper you’ll loveee this as it’s absolutely full of it and it’s the main taste you’ll get from this.
The pasta is okay but more on the overcooked and mushy side of things unfortunately.
The whole thing strangely has a bit too much moisture in it…I don’t know how else to describe it but it is almost wet and not in a good way.

Even though this is a “tomato and chilli sauce” it is almost devoid of flavour all in all.
I said the salt amount was low in this dish but it seems to not exist at all, it’s so bland.

For an emergency it’s not the worst thing in the world but if I had a choice I wouldn’t pick this.
It’s so inoffensive with it’s lack of taste it’s not hate-able (unless you really hate peppers) and reminds me of the standard, not great but not inedible sort of food you’d get in hospital.

If you’re not picky and really want some pasta it’s an okay choice.

Lets go on to the John West Light Lunch! 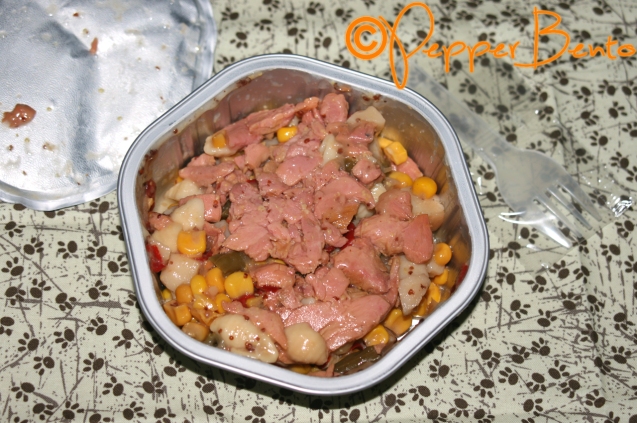 Erm…
I was joking about the cat food earlier but now I’m not so sure.
It actually does smell of that cat food smell when it’s opened. Not good.

As for the look, it almost looks like it’s jellied, something a lot of humanoids, including me, are not so keen on.

Now, begrudgingly, to the taste…help…..me.

Well, it’s not jellied, just extremely wet again like the first but this one wetter even than that and it’s not the dressing.
I’m guessing however they seal these to last years involves cooking it inside the container which creates an ikky water coating.

As for the taste….it’s not good.
Well, I’d never eat this again lets just say.
Again with this meal it is so so bland there’s just nothing to like, coupled with the sliminess, it’s just nothing that could be enjoyed as food.
The tuna is good, as you would hope, it comes in big chunks even though it looks like cat food, the pasta’s mushy and again the pepper is pretty much the only flavour throughout.

Without a doubt, the winner of Princes VS John West is Princes but neither of these are going to win any awards for taste.

A salad is definitely not the way to go with these meals.
The more seasoning’s and sauce that is put on the better, disguising the more unsavoury flavours and textures.

In conclusion, if you’re desperate for real food on the go but can’t get to anywhere that sells fresh food the Princes Tomato & Chilli Tuna Pasta Bake is a forgettable but not awful choice.

On the other hand, the John West French Style Tuna Salad is a terrible choice your eyes will rue for a long time.
It doesn’t taste as bad as it looks but it’s still pretty abysmal, the textures being even worse.
For the sake of taste buds everywhere, do not eat it.

Bring your bento next time!