I had a big think about whether or not to post anything today as it’s Easter bank holiday and well……. I’m not religious so I decided, why not!

This year I haven’t really seen much of Easter.
Believe it or not, there is at least one household not inundated with Easter eggs, and that’s here………………………………….
I want chocolate…

One thing Easter was good for this year was seasonal cakes.
Sometimes exclusive flavours are released for things like Halloween or Christmas and this year for Easter Mr.Kipling released some of their delicious French Fancies with only the yellow variety in the pack.
For those of you not in the know, the other colours don’t have a flavour, the yellow is lemon and the only reason to buy a pack!
I had to stop myself buying too many packs as once I’d had one, somehow the rest of the packet seemed to be disappearing……….erm……it’s a mystery to this day….?

On to today’s post which is of course, about bento!

I found this adorable little bento box with a really cheery Spring theme going on!

This one is by Navigate.

Unfortunately there was a sticker on the box, put on by the company not the shop, but it took the design off when it was peeled off, bums and fiddlesticks.

The company hasn’t got back to my email yet so I’m not holding out on any resolution but yes, the pretty design is not going to last long.

This bento box can be dishwashed according to the packaging but if the design comes off with a mere sticker on it, I can’t imagine the lid would survive a trip in there, though it doesn’t specify.

As for the overall design, the lid shuts and opens tightly with small tabs around it to make it easy on the fingers but an elastic belt might be wise when travelling with this, unless it’s really packed up tightly. 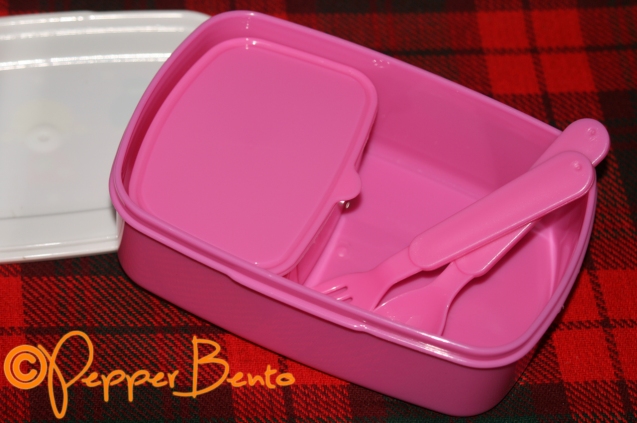 For features, this has a removable pot inside, it takes up about half of the box, so can fit enough for a side dish rather than just a dip and fits in either the left side or right.

The lid is the same on the pot as on the main box, tight fitting and secure but doesn’t have a clip per say so not uber secure.

It also comes with a fork and spoon for cutlery.
Though they are very good quality, like the rest of the box, they are very much for small children and as an adult you might feel a bit self concious using them in public!

Saying that, they also have nowhere to go in the box when it is full so for me these won’t really be used, though if you did want to, you could put them under that elastic belt I was talking about earlier!

All in all, there are a few negative points on this box, the design is badly transferred on mine and is easily damaged so won’t last long and there’s nowhere to put the supplied cutlery which is a shame.
It would have been nice to have a clip of sorts to keep the box closed really securely but many Japanese boxes don’t have that so it’s not too much of a problem.

On the plus points, the plastic is really good quality and I think it will last quite a while in every day use, the pot can be moved, is large, and has a lid and though the cutlery can’t be stored when food is inside, they’re a nice touch small children could use.
It’s also a great size, not too big or small so both Western and Japanese food would fit in with enough to fill you up nicely!

I’m happy with it all in all though I could have been happier with the design on top and the customer service by Navigate themselves which has been non-existent so far.

Still, a lovely design with a very Japanese feel to it, even though it’s ikky ikky pink!
A good choice for little girls!