You may recall me issuing a statement on Beer52 a few weeks ago and mentioning that Beer52 have asked me to review some of their beers after my last review, where I concluded that there was a lot of room for improvement across the board.

In my last review I didn’t go into much detail about the beers themselves as I hadn’t tried them all at the time, instead concentrating on the overwhelming issues of their service which they say has changed.

I don’t have a subscription myself any more and therefore cannot comment on the overall service changes such as their new online cancellation process so do let me know what you think.

This week I will be concentrating instead on beer52’s beer for this month and I’m afraid it’s not been a great ride boys and girls.

As well as the 8 beers of the month, there was also a small package of snacks and some paper in the form of some adverts.
Last time I reviewed these I noted an excessive amount of advertising, 4 or 5 leaflets a time whereas this has 3, a marked reduction that really helps image wise.

They also included a cute little beer mat where you can rate your beers and send them a picture.

While I’m on the subject of paper, this month I was informed that there was a problem with their printers and that their Ferment magazine would be sent separately, it arrived the next day and I was pleasantly surprised to find it wasn’t the “worse than bad toilet paper” quality that I had commented on last time.
Last time, the magazine seemed like an excuse to squeeze in even more adverts with hardly any content to speak of.
The content is much improved in this one as well as the overall quality of the paper and the art on the cover is something I would gladly frame on the wall, though I am a big Escher fan.
The magazine really screams that effort has been put in which is nice to see. 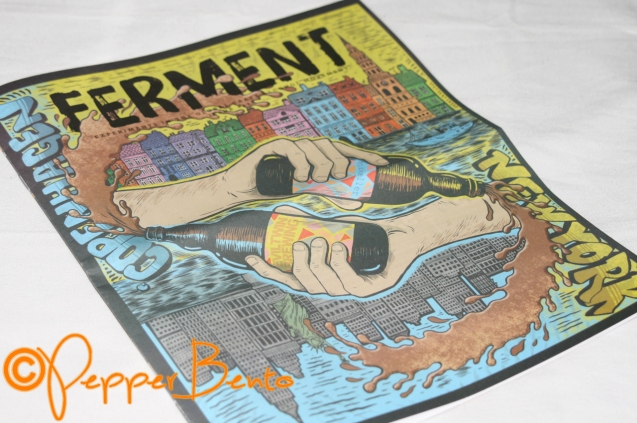 Now, on to the stars of the show, the beers!

If nothing else, the presentation of the beer is beautiful, I love all the unique labels, all with their own style and ideas. 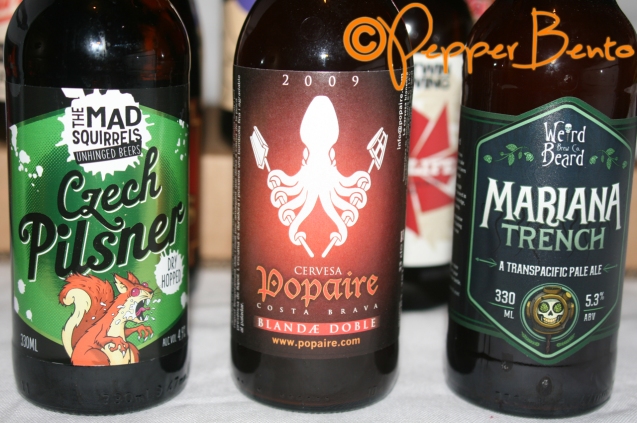 First up is The Mad Squirrels Czech Pilsner. The mad squirrel on the bottle is so creepy it’s cool and certainly a striking character to remember the brand by.

Next a more classy number with Cervesa Popaire Blande Doble. I love sealife and though I don’t have any tattoos I would consider getting that design done, it’s gorgeous.

Lastly in this line up with have Mariana Trench, a pale ale by Weird Beard Brew Co. Again a lovely bottle with a matching skull bottle cap. 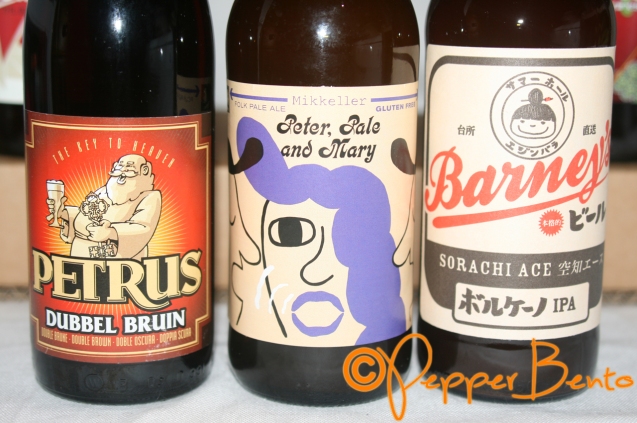 Last but no least we have our slightly sleazy bottles with the sexy Devils IPA and EvilTwin Brewing’s Low Life, which has some rather amusing packaging.

These bottles aren’t just for show though and so, to drink.
Armed with my partner in crime, a guy that enjoys an ale quite a bit more than the next man, and my trusty Millennium Falcon bottle opener; we ventured to try a few of these and give you our thoughts, uninterrupted.

Let me just start with saying that I don’t know what’s going on with the beers today.
This isn’t just with Beer52, it seems to be a new trend but it’s something that evident in a lot of Beer52’s beer.
There is a horrible flavour that seems to permeate through most of the range, a musty, floor sweeping, cigarette butt kind of taste which is not pleasant in the slightest. Beer shouldn’t taste this way until the next morning.

I’m not blaming Beer52 for this, it isn’t a storage thing I’m sure. The way the beers are described it is an intentional part of the modern brew.
In my other halves opinion it was a cock-up in the brewing process that people have put a spin on and are trying to tell us is good. There is a reason the old breweries are still going guys, beer should taste like beer and hops not fancy fruity hops that seem like they’re unripe.

So with that said, let us begin. 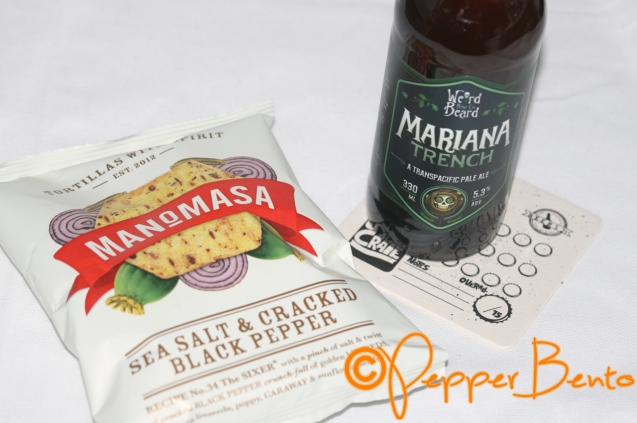 We thought it had a nice amber that smelt sweet on opening.
The taste was bitter, warming, slightly fruity, slightly sweet, not too harsh, a bit fizzy and felt like lager, not the worst drop but not something we’d put on the Christmas list.

Next, we tried the snacks which come free with every box with some Mad Squirrels Czech Pilsner. 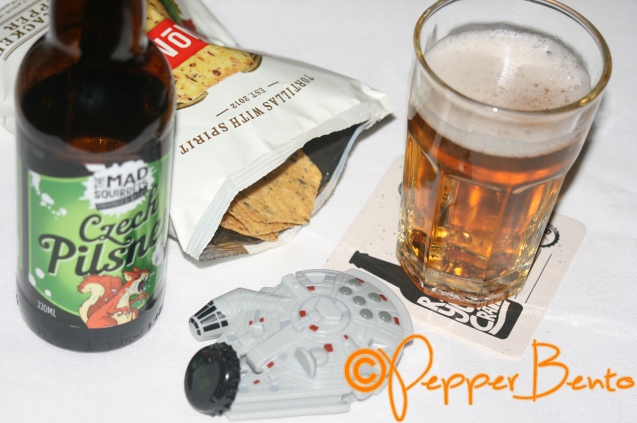 We thought these were crispy with a nice flavour. The pepper and spice grows over time in your mouth but we couldn’t feel any crunchy pieces of salt which was a bit disappointing, also the “natural black pepper flavouring” in the ingredients list seems a little strange.
They haven’t been seasoned too much so you can really taste the corn and the seeds. They certainly have you reaching for a beer.

On to the Pilsner….

This smells reminiscent of fruit, I don’t know what kind of fruit but it does give a berry like vibe. The taste is very bitter, but not in a good way. Try to imagine bitter tea with hint of berry powder and a shot of cheap vodka thrown in. Tea you ask? Yup, it actually has a hint of good old (black unsweetened) English tea to it and that’s the best part.
If you understand how much we hate to waste food or drink you’ll know it is a big thing when I say we couldn’t finish it and had to throw it away.

Next we tried some Cervesa Popaire Blande Doble.

Wow, this one actually tastes like an ale, a pretty good ale too.
It smells sweet and fruity with a rich ale smell, it tastes hoppy, strangely savoury like Marmite, an almost umami flavour and we couldn’t help but wish we had a huge steak while drinking it. It really gives an appetite and is zesty, tangy and rich with a lightly misty amber. It isn’t something we could drink a lot of with its heavy bitterness but it is far and above anything else we’ve tried from this box and I’d certainly say to order it with a meal if you ever get the chance.
A very interesting beer!

Then it was on to Mikkeller’s Peter, Pale & Mary.

This one has a lovely smell of passion fruit, it tastes fruity like passion fruit. It is warming but harshly fizzy and watery with that horrific musty powdery taste I mentioned, that overpowered the drink so we couldn’t finish it. Bare in mind this is one bottle between two people.

Last but not least we tasted Low Life, lets hope it doesn’t taste like the “limp, wrinkly flavor” “Finished…with an insulting high price that will give you a foul feeling in your mouth” as they describe it.

It smells fruity, tastes a lot like fizzy water with a little bitterness and zestiness and had that awful musty flavour again though it wasn’t as strong in this brew so it was almost drinkable, couldn’t finish this one either sadly. I’m quite bemused to say that this is one beer that lived up to its description. Mmmm, wrinkles.

All in all Beer52 is a mixed bag, as far as subscription surprise boxes go, at least you consistently know what you’ll be getting, 8 beers at about 330ml each, unlike some subscription services there is not an inflatable crown or cardboard door hanger in sight ,viewer discretion advised. (HOW MUCH worth Lootcrate?!?!)

If you’re all for new experiences be they bad or good or are really in with the hipster beer brewing beard toting type hey why not give it a try?

Let us ponder the pros and cons.

Pros
Cool extras are nice. Coaster, nibbles and magazine for all.
You get a consistent amount of value every month unlike other subscription surprise boxes.
You get beer that is quite fresh (most of these were brewed in April according to their labels).
Your beer is packed nicely, never had a broken bottle so far.
Comes straight to your door.

Cons
You’ll get a few adverts (though much improved).
Some of the beers can be pretty rank, one out of five drinkable so far isn’t good odds.
Averages out at around £3 per bottle

All in all it depends on your priorities, whether it be being fashionable, tasting good food and drink or trying new things, it’s up to you to decide whether you think it will be worth it for you or not.
Personally I like the company and I like the direction they’re trying to take themselves I’d just prefer them to get in with some more established and less fashionable breweries.

If any of your guys have a subscription or are planning to subscribe to Beer52’s service, drop on by and let me know your stories and experiences good and bad, I’d like to hear how they are doing myself.