Today I’m going to be trying another American confectionery favourite in the hopes that there is something nice in the world of 90% sugar products.

I’ve already tried Twinkies, Butterfingers and a Tootsie Roll which were all pretty horrible, though the Tootsie Roll was the most edible.

This week I’m going for another in the Tootsie Roll Family, the Charleston Chew!

I don’t know if you’ve ever watched it, but I am a big Futurama fan and they mention the Charleston Chew quite often.
At first I didn’t know if it was a real thing or another of the many bizarre and cool things that now exist on Earth in the year 3000, where the show is set.

Indeed they are a real thing, unlike Thompson’s Teeth sadly, so when I saw one in the shop I had to see what it was like, after all, people are still eating them after 1000 years according to Futurama. 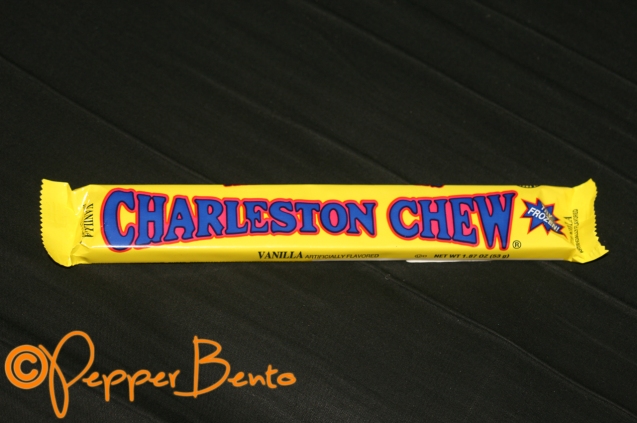 The Charleston Chew is significantly longer and wider than a tootie roll and thankfully they have actually decided on a flavour for this, vanilla, rather than tootsie rolls which just says contains artificial flavours….which? We’ll never know.

It describes its self as a chewy flavoured nougat with a delicious chocolatey coating.

Chocolatey? The legal term for not legally chocolate at all but don’t sue us we never said it was.

So from the description I’m thinking it’s like a Mars bar without the caramel and real chocolate?

I like that it has card to protect it from being squashed but it also seems to have…..enhanced….. the perceived size of what is inside too. Cheeky.

Lets have a look at the ingredients actually, before we willingly take a bite of this. 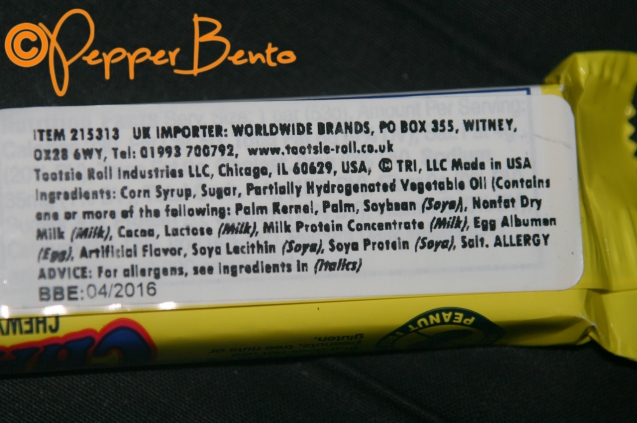 Yay, Corn syrup and sugar, 2 of your 5 a day.
Partially hydrogenated vegetable oil which is a mix of one or more vegetable oils, palm kernel, palm or soybean oil, depending on what they can get I suppose.

Of course, knowing it’s made of a mix of sugars, oils and chemicals, I can’t wait to try it………………so lets put it off with a look at the inside. 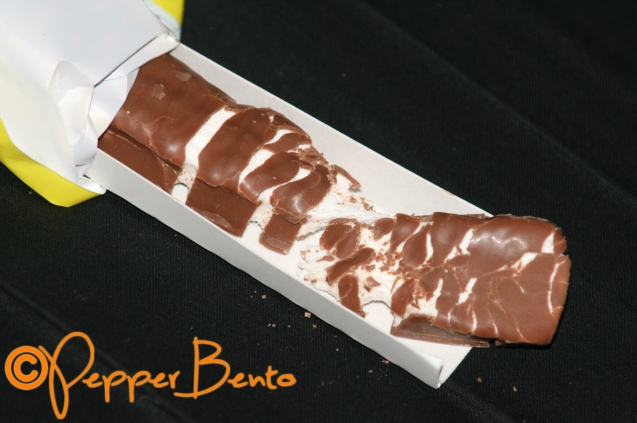 I approve of the zebra look that happened when I pulled it apart I have to say.

It doesn’t look Mars like, it’s too white and more fluffy than that.

First off the chocolate….y coating is just that, cheap as you can get, really thin, not nice chocolate-foodstuff.
Sadly that’s been a theme with everything that has had chocolate on that I’ve tried from America.

The inside…..it’s not like a Mars bar at all but funnily enough they both are described as nougat.
Is there a whole world of wildly different nougat out there I don’t know about or is just that the Charleston Chew is being kind when it describes it as nougat?

The vanilla flavour is weird…it tastes more funky than anything like vanilla to me and it tastes and feels like the marshmallow you get in those really cheap teacakes which have those hard, stale tasting disks of biscuit at the bottom.

When they are eaten, chocolate and nougat together, it’s not that bad.
Sure it’s cheap as hell and it tastes it but it’s edible at least and it’s not deeply offensive to the taste buds.

The final verdict?
It’s certainly not the best tasting thing in the world but far from the worst.
You might not regret eating this until you look at the ingredients.
As for lasting 1000 years, we will never know.

Gif and video owned by their respective creators, all copyrights to them.