I have a cool lunch box and you can look at it if you wanna.

Scroll with me my pretties….. 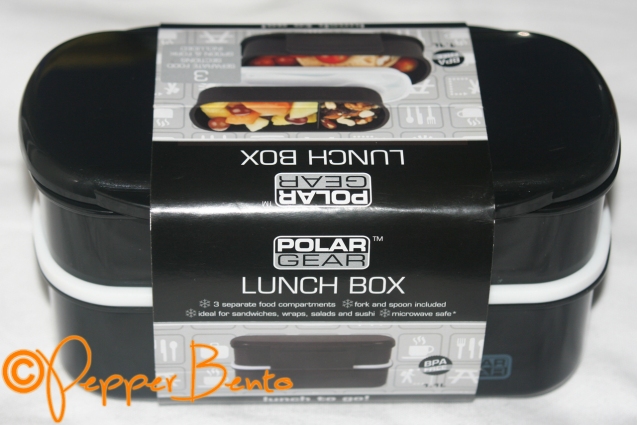 Remember that mystery red bento box I showed you all a few weeks ago?
Well, this isn’t it.
If you do remember it though, you get a cookie.
Though it still hasn’t been identified so maybe I should withhold ALL cookies!

This is in fact, the rather attractive Polar Gear Lunch Box.

In case you’re colour blind this box is indeed black but they also make them in “Berry”, purple to us lesser connoisseur of colours, a pink which has severely damaged my retinas just by looking and turquoise which looks a normalish light blue to me, not the aquamarine sight stealing kind of blue. Maybe I just can’t tell after that pink. 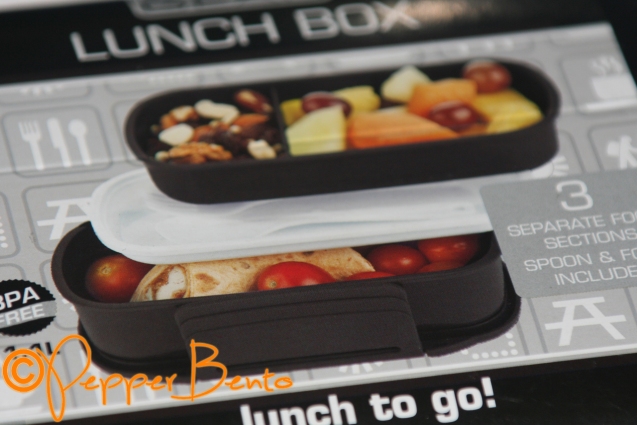 If you’re the kind of person that eats mainly tomatoes, I know you guys are out there waiting for the perfect container, the Polar Gear Lunch Box ensures it’s the box for you. 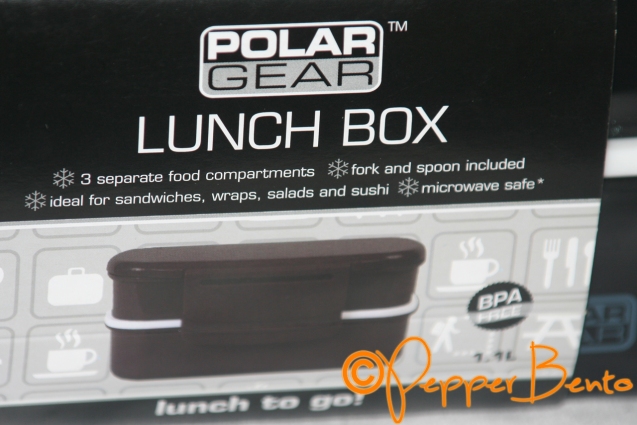 Apart from it’s handsome good looks, this box boasts 3 separate food compartments, a fork and spoon.
It also mentions that it’s ideal for food to go in, as we’d all hope, and that it’s microwave safe.
There is a mysterious asterisk on “microwave safe” but be assured, as your bento detective and reviewer it is my job to find out where those pesky asterisks lead.

Aha! It can only be microwaved without the lids, which is pretty standard really so ominous asterisk crisis averted!
It doesn’t say how long it can be microwaved though and since it can be dishwashed but only on the top rack, I would say be cautious if I could spell such a long word.
What I’m trying to say is don’t cook your lunch with a blow torch okay? 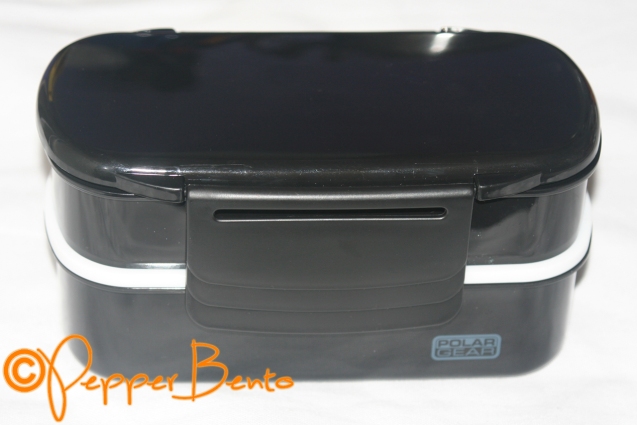 As I mentioned the package says this has three compartments which strikes me as slightly odd.
There are only 2 tiers. I know, I’m fantastic at maths, bare with me.
Are they including the middle white divider as a compartment or something else?
I’m not sure about you but since there isn’t another tier I think it could be a bit of a swizz, we shall see.

Apart from the two tiers we also have a really swanky lid, it has hinges and everything!
Seriously though, it is made from great quality plastic and the hinges themselves aren’t on one of those 3 day self destruct timers like a lot that are made badly.
It works by the lost art of clipping stuff to other stuff…fu….which, due to those mystical properties of course, means it fits well and securely. 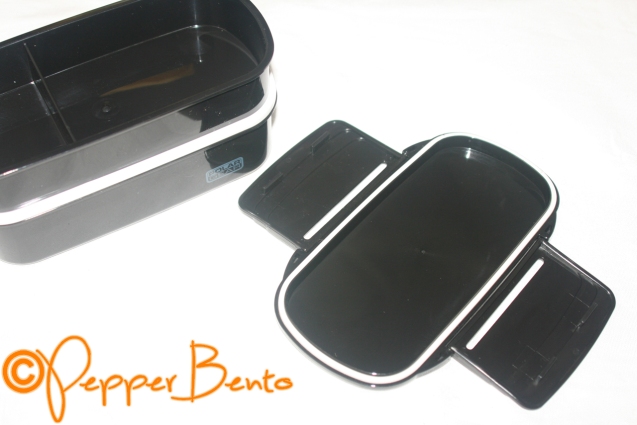 The lid folds out into an extremely bad toy bird or erm….something from the tolietries ailse for women?
I do pray they were thinking more of birds wings than…..well, THOSE wings…. 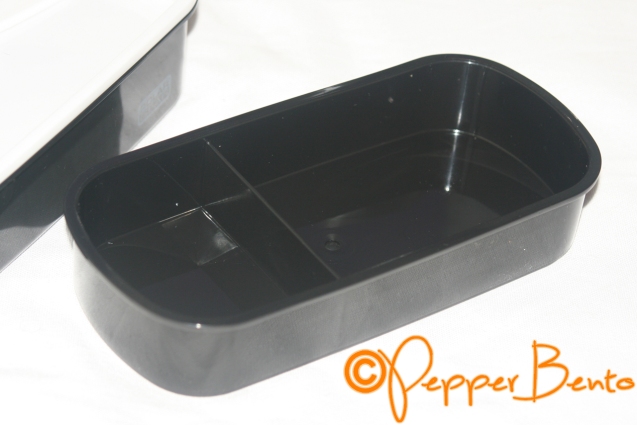 Well, as I suspected it is a bit of a swizz when they say there are three compartments.
They mean they moulded a divider into it.
I guess technically that is an extra compartment buttttt it does sound a bit better than what you get.
If they said it had a divider instead they may have drummed up more buisness and they could have had an extra snowflake bullet point, I know I would take that opportunity. Oooooo! SNOW!

Still, without thinking of the advertising, it’s a nice sized and well placed divider which could come in handy, the division is really sturdy though doesn’t come out so you may be somewhat limited in that respect. 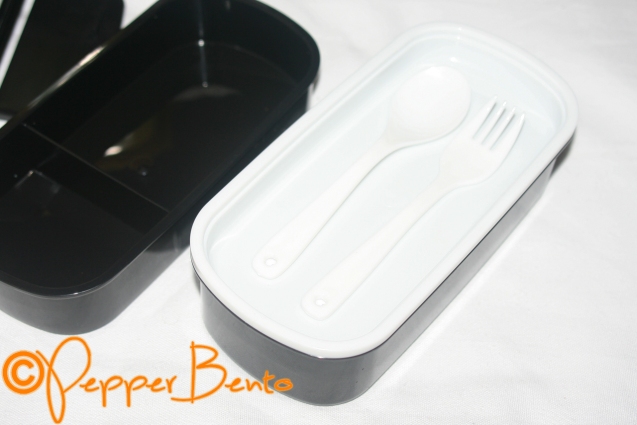 The middle white section holds a handy spoon and fork set which are made quite tough indeed, my eye says the fork is surprisingly sharp too.

They have little holes in the very ends but these seem to be for decoration only as they have nowhere to clip at all.
That coupled with the fact this section is quite deep means you’ll hear quite a bit of shifting around inside while you’re on the move.
If you don’t mind people thinking you have a ferret or other suitably sized woodland creature in your bag in transit, you’ll be fine.
I do like the fact it’s deep though, it means essentially you could fit most any cutlery you like inside, maybe even two pairs for a romantic lunch date, if that damn ferret hasn’t eaten it all. 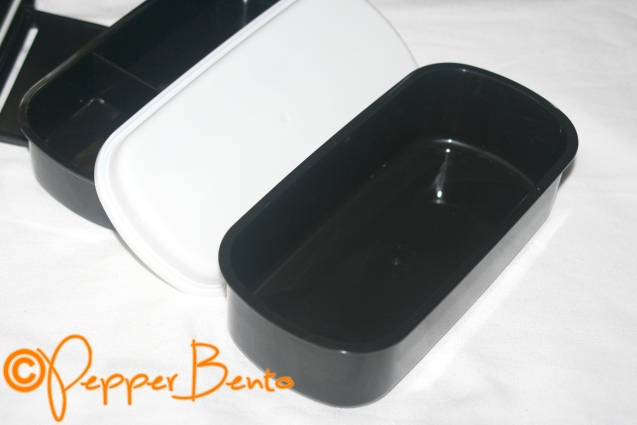 Speaking of sharing this between two, the box holds just over 1 litre all in all and each tier is quite deep so if you’re packing Japanese food for one, you’ll need a mighty appetite to finish a full box if you’re packing mainly rice.

All in all I love this box.
It has all the prettiness and compact size of a Japanese bento box with a bit more of the size and chunk you need to fit in a decent amount of Western food.
This is one of those boxes that could be used every day and suits any style of lunch and for it’s price, about £7, it is a lot cheaper than a lot of imported Japanese boxes at the same quality level.

Coupling that with the fact it can be microwaved and dishwashed, though carefully mind, and has a set of cutlery that will actually last rather than being disposable plop, I can see myself using this a lot in the future!