If you’re into video games you have undoubtedly heard about a game coming to us soon, Fallout 4.
Whether you’re interested in trying it or not, it has caused a massive amount of excitement with fans of the Fallout franchise.

If you’re not sure what the Fallout Games are all about, they are set after a nuclear war (which you may have gathered already by the name). Years after the horrible event, there were of course few who survived outside of the lucky people who got a place in a fallout shelter.
Fallout shelters aren’t all sunshine and roses though and whether some brave people need to leave for supplies or all Hell breaks loose in one of the tightly formed communities, people journey into the Wasteland where it’s either kill or be killed as animals or even people that managed to survive and have mutated into grotesque monstrosities through radiation.

You play one such person travelling the wastes and with limited resources and a fragile human body, not too keen on being ripped apart by beasts, you play to survive, possible meeting some friendly people on the way.
It is a grim game but it holds an atmosphere, character and charm that are pretty unique to the franchise.

I am a big fan of Fallout 3 and when they released a set of figures by “Pop! Vinyl” to promote the new game I had to get them!
Of course, some of the most interesting character designs are the creepy enemies and I decided to make one into a bento lunch!

Thankfully the figures are much cuter looking than in the game, I can’t imagine a very accurate version being appetising at all!

I chose a Feral Ghoul, a poor husk of what was once a human who suffered too much radiation poisoning but didn’t die.
Some ghouls are harmless, nice people, that just look pretty hideous, but as the years pass, the condition can drive the victims into a mindless zombie state, unable to keep control of their mental faculties, feral and ready to kill anyone in their path.

For this I made a corned beef sandwich, made to fit my box, then carefully cut some more out into the shape of the figures head.

For added ikky and to make the horrible skin look even worse I added a thin layer of ketchup which goes really well with corned beef! 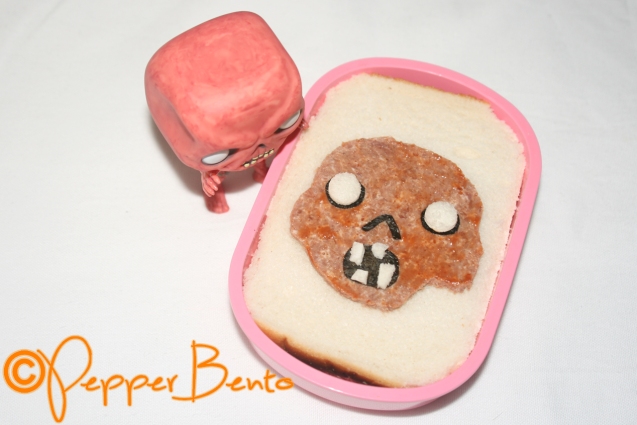 I then cut out some nori seaweed for the eye and nose sockets and another piece for his mouth.

Lastly I added some more bread pieces for his blank, staring white beady eyes, as is the Pop Vinyl figure style, and his few remaining teeth, which have stayed in pretty good shape all things considered!

I’m not sure I ever wanted to think about eating a feral ghoul, but this time, I’ll make an exception. Mmmmmm. Beeeeef.