I was feeling a bit inspired by a new cook book I had my nose buried in all night so I decided to get to work on a bento this morning with a sort-of-kind-of-maybe idea in my head of what to do.

What resulted was a tasty little panda forest of sorts!

Tenderstem broccoli is a strange one, it is a hybrid of broccoli, the only vegetable I’ve eaten that I am really not fond of and a type of Kale which seems to be forcefed down your throat from Kale smoothie health obsessives. By rights I should hate it, but damn it is delicious!
Apparently two wrongs DO make a right! 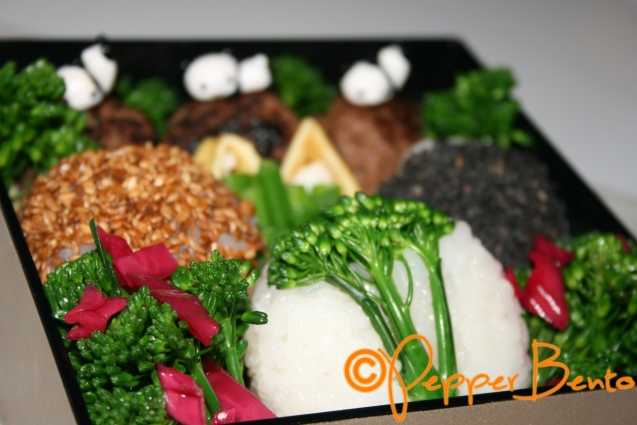 For added colour, a little pickled red cabbage was added to the tenderstem up front and right in the middle I added some of the crunchy stems, yum!

At the back we have some tamagoyaki (rolled omelette) that I rolled into pretty petal shapes and last but not least, some soy glazed British beef meatballs that seem to have grown some rather interesting inhabitants somehow. 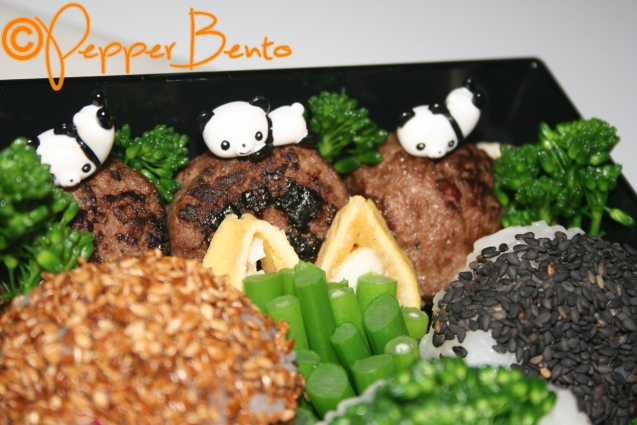 I don’t know….they look a bit to adorable and cheerful to be trusted around this tasty food!

I knew it! Cheeky little rascals, I turn my back for one minute!
Then again…..the hubby was there too.
No, it couldn’t have been……but then again…..there were toasted sesame seeds…..and rice…..and meatballs….all welcome treats for him………waittttttt a minute! Is that a rice moustache?
It is! Get himmmmmmmm!