Today I’ve got a mega, in depth review for you guys, it has bento, it has boxes, it has massive explosions…okay, maybe it doesn’t have explosions, I’m on a very tight budget here.

I guess we can afford this though…

I know, the CGI on that was amazing, you can’t believe your eyes.

Today by complete happen-stance I have another product by Compleat.
Last week you may remember I reviewed their “Robust” case which was more of a complete, useless flop than a saucer made of jelly.

The box it comes in is pretty minimalist, to be honest, it doesn’t even look like it protects what’s inside so I’m not sure it really has much of a point, it’s not even secured in so really it’s just there to be pretty.

It does serve as a place for them to put their description of this box though, the likes of which makes me kindddddd of hate it already.

“Gourmet is designed to make your colleagues and friends jealous not only of your food but also of how you carry it. Exclusive design in high quality material lets you eat in style. Bring along the silverware from home and dine like you’re in a classy restaurant.”
….and so on and so on and the such like.

Anyone who has been following me for a while now (hello and thank you!) will know I absolutely hate pretentious old pap which that was certainly full of.

Again, putting that bias aside, I shall assess this completely fairly.

As with their last product, I can’t fault them on their style.
This is a pretty enough box, the colour is fairly neutral and calming.

The aqua-ish top is actually made of silicone and serves a couple of purposes.
The first is to hold this box together. 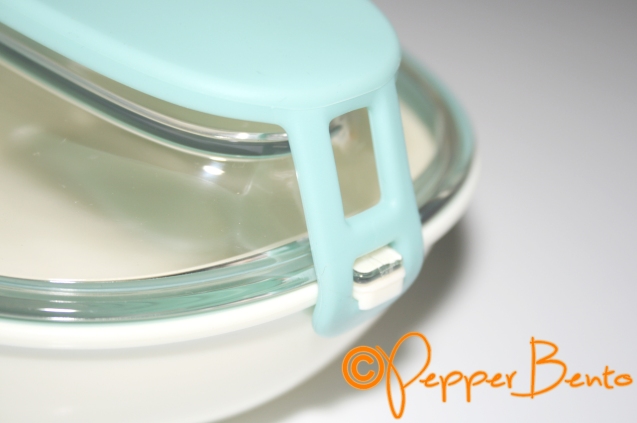 It’s fairly low tech as you can see, the box has a notch, the silicon has a hole.
The hole above it serves no purpose so it’s really for decoration (and saving money on materials) only, though I wonder if having it like this will hasten a weakening or snapping of the silicone.
It seems very sturdy and thick, when dishwashed it didn’t seem to warp in any way but over time it may stretch out and make the connection loose if not unable to close.
At the moment it is very tight and a bit of a pain in the bum to close, certainly something you need two hands and a bit of welly for.

The second use for this piece of silicone is to hide and seal a holder in the top for cutlery.

Now, for the sake of testing the claim of bringing “along the silverware from home” and no other reason whatsoever, I will stick in a real knife and fork for test purposes.
I wonder if my colleagues will notice they are not real silver.
Ahhh the problems of a toffee nosed git.

They fit in just fine so if you really do wish to weigh yourself down with heavy metal cutlery meant for sitting at the dinner table in the hope someone will be jealous thinking you got your meal at a fancy restaurant, you can, though I advise you may look, or in fact be, a complete idiot.

Now before I put some food in this baby and take it for a test drive, I just want to show you the extras that come with this.
There are two, both of which I think are a sad waste of plastic unfortunately.

First there is what they call a “Salad drainer” which looks like a giant guitar pick with a few pieces cut out of it.
The bottom has plastic that will keep it at a slight tilted angle.
As you shall see in a few moments, I added salad to mine and I didn’t find a need for it at all. If you’ve dried your leaf, you’ll be fine.

Secondly, we have the sauce container. 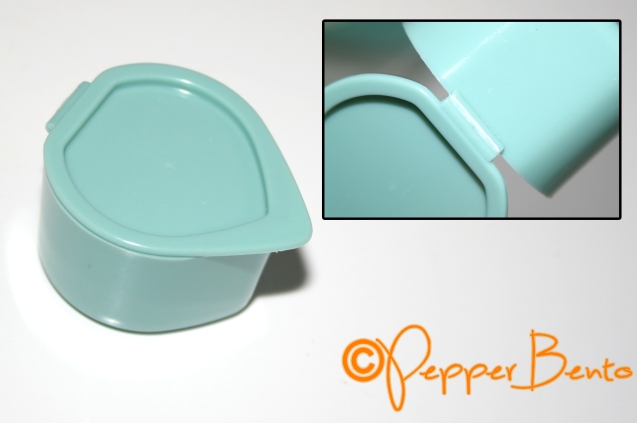 There are a few things wrong with this for me.
First and certainly the most important, the size is absolutely useless.
This container is about the same size as one of those tiny UHT milk cups you get in Cafés, the ones you need at least 3 or 4 of to add enough milk to your cup of tea or coffee.

For a dressing it’s pretty useless since it wouldn’t flavour much and for anything else, well, it’s still too damn small.

My second issue with it is that it has nowhere to go even if you did find use for it so it may be one of those annoyances, rattling around inside the box in your bag.

Lastly though and pretty vital, is the lid.
I found the container to be fine when it came out of the dishwasher, no warping or scratching but that’s where the durability stops.
The lid fits very tightly on which means you can be pretty confident it won’t leak everywhere, though you need some muscle to close it.

Unfortunately it won’t be attached for long because it doesn’t have a hinge. Instead it has a very thin piece of plastic, which after opening and closing just twice, is already looking like it will split apart at any minute.

So, ignoring the extras, lets see what I can fill it with!

I roasted up some chicken wrapped in bacon, boiled up some free range egg, cut up some vine ripened tomatoes and for the star of the show, I made a red chilli and soy sauce egg noodle salad, tossed with a little green batavia, red cos, spinach and rocket.

To finish it all off, I made some Japanese egg mimosa as a topping.

It looks all very delicious but before I tuck in, lets do a few more tests.

This box has two sections, both the same size, with a divider in the middle.
The problem is, I don’t think the divider is high enough to be of any use.
I’m going to stick this bento in a bag and have a bit of a stroll around, see what comes out on the other side, no pun intended.

Before that though, here’s another, more sensible option that fits in the cutlery section. 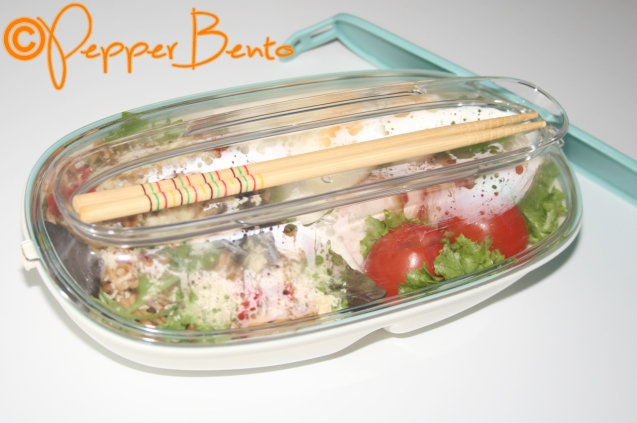 Well, that was only a couple of minutes of walking so lets see what’s happened to my pretty pretty meal. 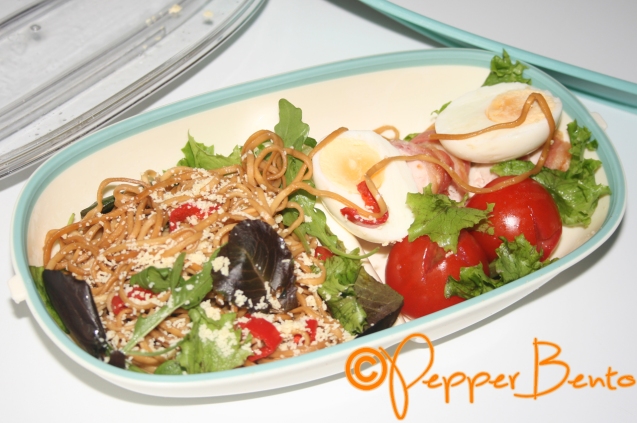 Well, the salad has moved more over to one side, some of my topping is on the lid and on the other side, some noodles crossed over into the other section, my eggs ran off completely, the chicken wrapped in bacon is scattered around and one of my tomatoes fell over.

As I mentioned, this was only a couple of minute walk so the divider in between is quite useless, it needed to come to the very top of the lid or not have one at all. I can’t imagine how it would have looked after commuting to work with all the hustle and bustle that brings.

All in all, there are good and bad things about this box.
It has a pretty design, though a bit of an awkward shape.
It has accessories that are pretty useless, but has a very nice cutlery holder which can hold full sized cutlery with ease.
The silicone lid is an interesting idea but I feel not the most hard-wearing design choice.
All parts dishwash safely and well but the divider is too short to make much of a difference when packing food.

At an RRP of £15.99 it’s not cheap and I do wish it came with some cutlery, maybe instead of the accessories it did come with.
You may be able to find it cheaper if you shop around though, as long as you don’t mind your strawberries in your meatballs.

Oh, and for the record, nope.
There’s not a chance in hell it will fit into the “Robust”.