With just a couple of weeks until the end of the year I have decided to share some more of my recipes with you, rather than writing bento posts, since hopefully, most of us won’t be needing to work quite as much to need a lovely lunch.

Here is my recipe for hearty cheesy and bacon filled potato skins, with smoky bacon and extra mature cheddar.

The filling is so creamy and the skin so crisp, they are a delight, if not a bit of a guilty one, to enjoy! 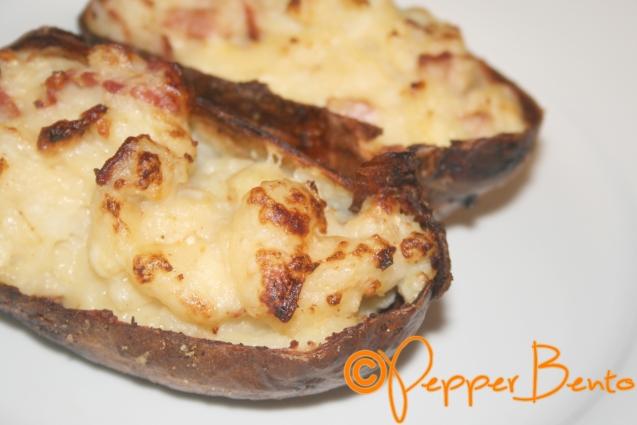 Scrub the potatoes under running water until clean and place them into a steamer basket over a pot of boiling water.
Turn the heat down the simmer and place on a lid with the potatoes inside.
Let steam for 35 minutes.

Preheat the oven to 200oc and place the potatoes on a baking tray.
Drizzle on all sides with vegetable oil and grind fresh salt and pepper oven the skins.
Place in the oven for 60 minutes, or until a skewer goes through the potato very easily and the skin is crisp.

With kitchen scissors or a knife, cut the bacon rashers into chunky squares and place in a small frying pan heated to a high heat.
Stir the bacon until cooked through and a crispy brown.

Place the bacon pieces into a large bowl and cut the cheese, which should crumble as you do, adding it to the hot bacon.

Cut each potato in half and using a large spoon, place all of the potato in the large bowl, along with the butter.

Fold together with a spoon until all is well incorporated, taste and add more seasoning or butter if needed.

Line the skins up on a baking tray and spoon an equal amount with the large spoon into each skin. Don’t smooth the filling down.

Place in the oven for another 15 minutes until the cheese is melted and brown on top.

Serve!
We had ours alongside some lovely coleslaw but if salad is your thing it would also go wonderfully.