It has been sooo hot here recently and though the sun can be nice it’s important to remember to keep hydrated, especially on the go, otherwise you could be in a lot of trouble!

With that in mind I picked up one of these handy water bottles to show you guys, they sold out really quickly in my local shop so if you still want one by the end of my review, get one when you can find one!

Yeah, it’s not much really.

Apparently it’s ideal for artists.
Who knew they were humans that needed to drink too? You learn something new every day.
I’m only kidding, I’m sure they mean to take around with you so you can paint?
If not, hey, it’s an idea.

These bottles hold 500ml, a decent amount for the size and it comes with a little Carabiner to clip on to your belt, though I would imagine just putting it into a bag would be a little less annoying than having this swinging around by your leg.

Sadly, this is not suitable for hot liquids, which of course would be really dangerous in an air tight bottle due to steam and all that jazz but it also can’t go in the dishwasher or microwave.

I think that means, in technical terms, that it’s made of a load of old pap.
It is BPA free though so it’s at least safe pap. 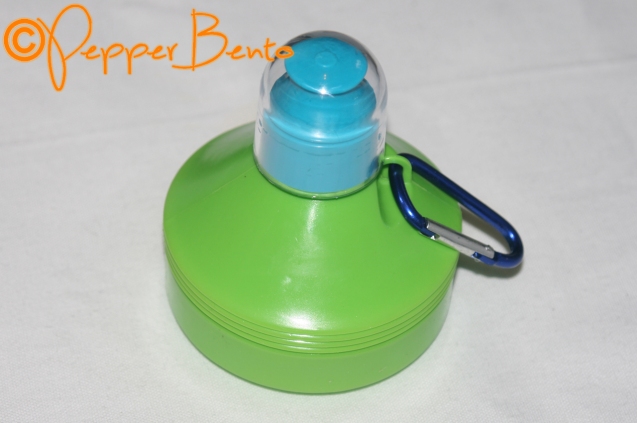 Out of the package you can see the small plastic loop moulded for the carabiner to hang from, it might not last that long as really, the quality of plastic on this isn’t great.

The lid to stop any outside nasty germs getting on the piece you’re mouth is touching is made of good quality hard plastic but it’s pretty poo because it doesn’t really stay on, sometimes it falls off straight away, sometimes if you put enough pressure on it, it doesn’t.
Either way there are no clips to keep it secure in any way so that pretty much explains it. 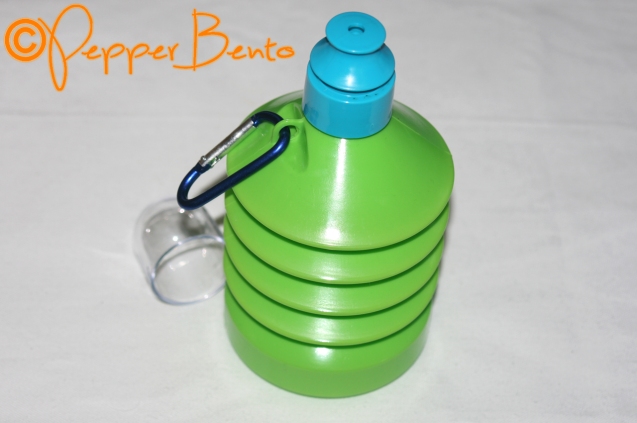 As for the unfolding, you will need to take the cap off and open the lid first for air to be able to get in and out.
After that you just tug the whole top and the rest concertinas out into a fully formed bottle.

The plastic is a soft and oily feeling type which is sturdy enough to stand up by its self when not filled but could be for example, easily punctured and cut with scissors.

This bottle was under £1 which is about the most it’s worth.
It’s not the best quality and the lid only holds on by friction, when it pleases.
The design of the folding up and down is very nice and works well but the fact it can’t be dishwashed may also be an inconvenience for some.
It will do the job nicely for a while but I have a feeling the cap will be lost very quickly indeed.