I found some rather odd crisps hanging around outside on a shelf on an inside of a shoppy and I thought you might like to explore them with your eyes. 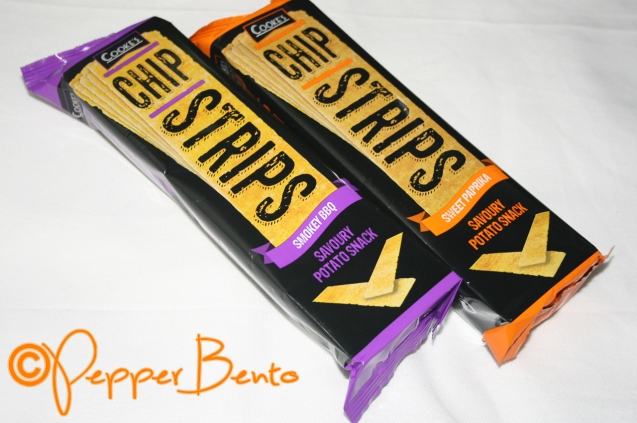 It’s like a crisp but you need not pause to shovel-hand yourself another so soon!

So I saw these, never having seen crisps like this before and thought it was quite an interesting concept, certainly an easier way to make crisp sandwiches, if opening a bag and stacking piles of fried tatty goodness on overly buttered bread was ever too hard.

I picked up two flavours, though they also do a salt & Vinegar, which my snaffleometer has deemed as acceptably tasty.
Lets see if these also pass.

So, aside from the seasoning which will be different in each, what are the crisps made of?
They aren’t whole pieces of potato…..unless the people at Cooke’s decided to grow some insanely large mutant potatoes just for these.

Obviously this is a processed snack food so I wouldn’t expect it to be full of Goji berries and kale, not the greatest for health, not the worst with anything really weird that can’t be pronounced.

Inside, they look like what Pringles are on the factory line before they are bent into Godly half-beaks.

Strangely, both of these flavours look almost exactly the same on the outside.

These are really light and thin, so sadly I was picking the carnage of a few broken ones out before I could find some whole ones. The guys at Cooke’s may want to redesign their packaging to avoid such casualties.

Lets try a bit of smoky b first, always a good staple flavour.

Crisp wise, they are very very much reminding me of Pringles.
I don’t know about you but Pringles for me come in 2 generations.
Generation one being thicker and before you got to the end of the tube you would feel just a little sick so you couldn’t quite eat them all.
Then there is Generation 2 which came out recently in the last few years, they are extra thin and light and you could inhale two tubes of them.

These Chip Strips are the generation 2 type of Pringle.

In fact, this barbecue flavour tastes pretty damn similar to Pringles BBQ flavour, just less intense, like Pringles put more seasoning on. They have the same overly sweet taste but still nice.
All in all, since the price difference between Pringles and anything sensible to pay for snack food or indeed any food is massive, these at £1 a pack (not a promotional price) are a good substitute and good in their own right.

Looking forward to the sweet paprika flavour, if it’s anything like the Pringle’s version of the flavour it will be yummy indeed!

Erm… this is extremly unexpected but this sweet paprika flavour has got to be the worst crisp flavour I have ever tasted in my life, erghhhh, I have never not wanted to eat crisps but my dear lord….ERGH!!

They taste like old watery green pepper, not a hint of sweet paprika anywhere, just musty and just………..doom flavoured.

To add insult to injury, my hubby absolutely hates pepper’s so this is like the crisp from Hell for him.

There is one advantage to these sweet paprika doom strips.
As I mentioned earlier, they look almost identical to the much tastier barbecue flavour, so if you’re evil, they could be good for general pranking or maybe for Halloween where you really hate the guests.

Strangely, looking at the ingredients it doesn’t seem like it would be the worst flavour known to man, it doesn’t have powdered snail in there…. it has salt, dextrose, spices, yeast extract, spice extracts (paprika, rosemary, smoke flavouring, salt.

Maybe the problem with them is there is no sweet paprika in there? Plus they added salt, twice.

So all in all it’s a thumbs up for Chip Strips!
It’s an interesting idea which I haven’t seen done before and they manage to get a similar texture to a much more expensive make.

Salt & Vinegar is great, Smokey Barbecue is nice, but stay the hell away from the Sweet Paprika flavour, otherwise you will wholly regret it.