Usually I am all for making things from scratch from the best ingredients you can get your hands on for your budget and…well…I still am.

Out of everything I would buy cheap, meat and fish are the last thing on my list, closely followed by eggs.
Of course I have no problems with a great bargain but when it comes to things like reformed meats, chicken nuggets, bad quality sausages and reformed fish fingers it’s a no fly zone for me.

Still, even with bad quality meat products with less real meat content than Quorn being brought and sold every day, there are still some very good quality products in the frozen aisle, particularly when it comes to fish.

They don’t have to be expensive either.
If you look carefully you might just find a special offer and get yourself quite a bargain.

Young’s is a really good brand of frozen fish here in the UK, not the cheapest of brands but quite frequently on offer and not much more expensive than others, so when I saw their fish in butter sauce at 2 for £4 or £3.50 each in Sainsbury’s, I picked up a few!

Turns out they are really delicious, if not quite small fillets.

We had them with new potatoes, some vegetables and a slice of buttered bread on the side but I had another idea to test out!

I figured that since the fish was already in a rich sauce it could be perfect for a fish pie!

My aim was to create a really filling and delicious dinner but have it cost as little as possible.
I also wanted it to be fast and easy and in the aid of both cheapness and quickness I brought in the instant mash potato.

Now I know many people are adverse to instant mash potatoes but with a bit of seasoning and a nice, crispy grilling, maybe even with some cheese grated on top, it’s really quite enjoyable.
It’s by far not the worst thing you could eat and it’s rarely anything but dehydrated potato so it’s not terrible for you either.
I’d say keep some for emergencies in your pantry and try it! 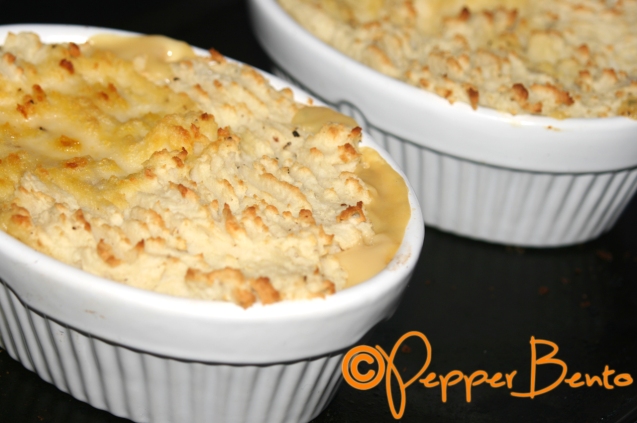 A no frills 250g pack of instant mash is about 50p and half of one pack goes into making two of these scrumptious and really filling pies so it can’t be denied that it is cheap.
As for the ease, a trained money could make the mash in under a minute.

The fish used in this recipe cost £2 on offer and can be either boiled in their bags or put in the microwave for a few minutes each which is easy as pie which just leaves the assembly, which is also easy.

This recipe though, is absolutely delicious so I thought I’d make an exception.
It doesn’t really have any right to be as good as it is for the cost of £1.13 for one pie!

So, without further ado, the recipe dear fellows! 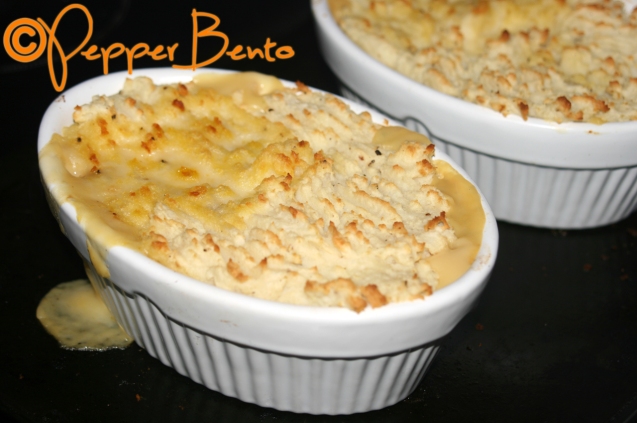 125g instant mashed potato flakes, made into potato via the back of the back instructions

560g package of Young’s Fish In Butter Sauce, cooked via back of the pack instructions

Take two individual pie dishes and fill each with 2 tablespoons of both frozen peas and sweetcorn.

Add in two packages of cooked fish in butter sauce to each dish and flake them with a fork.

Add in pepper to taste and stir to evenly combine with the peas and sweetcorn.

Taste the instant mashed potatoes and add in butter, milk, salt and pepper to taste.

Once the mash is to your liking, scoop out half for each and place it on top of the filling.

Use a fork to cover the filling and spike up the potato to create crispy ridges when they’re cooked.

Sprinkle them with grated cheese if you wish and place them on a baking tray and into the middle of the oven for 15 minutes.

Take them out and let them cool for a few minutes then tuck in! 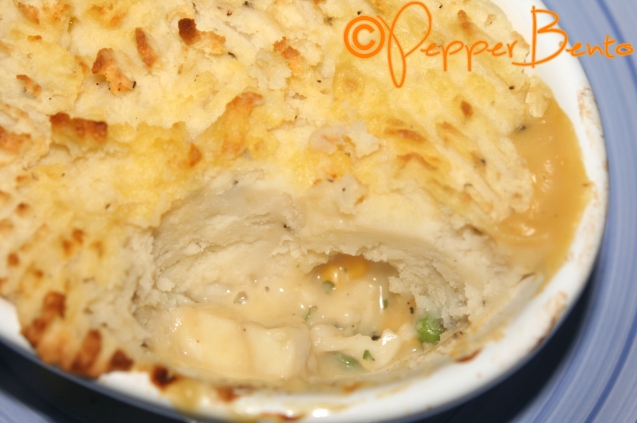